You are here: Home / Blog

A recent family situation has helped me appreciate the distinction between two “lasts”: knowing when the last time is going to be (“the last day before this store closes” or “my last day in high school”) and only coming to know that it was the last time long after the moment passes (“the last hug or kiss of a loved one” or “the last day I would live in that house”).

“When” things happen is rarely in our control.

I am not sure that it’s the same as, “Live each day as if it was the last,” but I am certain that the more I observe and listen and explore the realm of what is happening NOW, the more I am actually in touch with what I did not “know” before – that is, I notice things that were previously unknown. Removing the assumption of “when” opens up the reality of the only certainty: what is happening right now.

As I boarded a flight this week from sunny Florida (lots of smiling faces) to snowy Michigan, the line came to a screeching halt about half way down the ramp onto the plane. As I got closer to the door, two flight attendants were there to greet passengers and one was discussing with a woman already seated why it takes so long to board.

“I can’t believe they charge us to check bags now” blurted the seated passenger.

“You are preaching to the choir” said the flight attendant. “They’ve got it all wrong. They should be charging to carry bags ON the plane. Check as much baggage as you want under the plane for free, but if you want to carry something on, it’s going to cost you. That’s what takes so long. If there was no baggage here in the cabin (or less of it), we’d have taken off 30 minutes ago.”

Here’s a question: Are you listening to the people who are actually carrying baggage on your plane? Who are your users and what are they saying about your product or service? Most of what you need to hear isn’t audible from your office desk.

How do we find that balance between listening and responding to others, while at the same time realizing that if all we are doing is responding, then we aren’t innovating – we’re back to tending those crops again. While it isn’t always the case, I find that the more resistance I face to an idea or (gasp!) a CHANGE in how something is done, the closer I am to finding a better, more powerful way to do something.

Of course, if everyone hates it, then maybe I’m a bit off. But one out of ten isn’t always a failing grade. If one person (or one small tribe of people) latches on to an idea, or a tool, or a way of thinking – and each of them bats one out of ten, that’s called steady growth.

In an interview this past November with Krista Tippett, Seth Godin posed this question when discerning whether or not to use certain technology: “Is this going to help me hide? Is it going to keep me busy for 2-3 hours a day, but realize that I didn’t do anything that was really worth it?”

I find this incredibly powerful, so much so that we scaled back many of our online “portals” this past week so that were weren’t spending all day “tending the fields” as he put it. We are considering other ways to centralize what we do, and how we reach people we want to work with.

What’s keeping you from actually doing something today? I start every day with only one list: three things I want to accomplish by the end of the day. Not four…not a list of things I’ll never actually do. Three things that are so important, I will cancel anything else.

And I don’t make that list in advance (here’s what I want to do this Thursday). I make it when I wake up – and only for that day.

What can you remove from your day – today – that is helping you hide from doing the things you actually want to do – things that actually make a difference. Stop tending the fields.

When I work with young musicians, I usually give them a set of guidelines called John’s Grimoire. One of the principals of the Grimoire is the following:

There are three aspects to every sound:
Beginning – Duration – Ending
Care for the duration of each note as you would a child,
and respect the silence between sounds.

This silence “between sounds” is something I have come to appreciate more as I mature as a musician myself. At a recent performance, a colleague and I had just finished an improvisation (piano and voice) and as it ended, I was struck by the beauty of silence. Not only did it help me appreciate more deeply what had just happened, but it also gave me space to actually hear what was coming next.

When do I start the next piece? Even after thirty seconds, the sound and affect of the previous music was still resounding across the room. As I waited and actually enjoyed the absence of music, the time came to begin the Bach Invention. It was palpable…almost obvious…but certainly later in time that I would have initially guessed.

When do you start the next thing? Giving time to absorb and process what has already happened always takes more time than you think. Take the time, and respect the silence between sounds. I’ve found that starting the next thing is always later than I expect. Put another way: those things I start too early (at the wrong time) rarely fulfill me.

Special thanks to the folks at BigDuck for this great flowchart!

We are incredibly excited to announce a new partnership between 501Websites (powered by Post Communications) and the Episcopal Diocese of Bethlehem…read more here.

Here’s a great guide to social media specifically for non-profits: 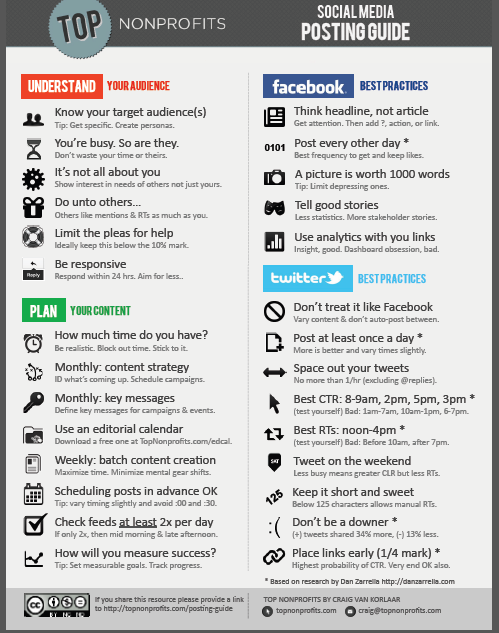 …was the phrase that emerged from an interview on the radio today about job prospects for recent graduates. The word that popped out for me was “but” – interesting that generally, we associate optimism with relaxation – perhaps he meant “Be optimistic AND don’t relax” – either way, optimism and an individual’s state of relaxation (or determination and focus) are not mutually exclusive. I know a lot of optimistic people (myself included) who are rarely relaxed. I also know some self-described pessimists who, because of that perspective, are super relaxed…”why bother, it won’t work out anyway.”

I like being an optimist. I also strongly believe that our outlook DOES affect our outcome. There’s a hand-written sign at our local pool on my way into the locker room that reads, “Do your best today.” I’m not sure how a pessimist would interpret that, but I read that before every workout and it helps me to focus immediately on what I’m about to do – nothing else. Of course, one can always swim faster, but I rarely leave the pool thinking I didn’t benefit in some way from my workout that day.

…the less I move.

This is a basic principal of conducting – as the music gets more intense, faster and louder, the conductor appears to do even less – there is only so big you can beat, I guess.

I had the “once in a lifetime” opportunity to sing under Robert Shaw – twice, actually. Both times (once in Carnegie Hall singing the incredible Eighth Symphony of Mahler) I was struck by how seemingly little he did. For the first half of the week, in fact, we weren’t even allowed to sing with text – we had to articulate “one and two and tee and four and” the entire time. This exercise immediately opened up our ears to actually listen to what everyone else in the 1,000 person ensemble was doing.

Another ear-opening exercise was singing to a make-shift pendulum Mr. Shaw cooked up out of his bag of tricks on stage – he literally pulled out a large piece of string and attached his watch to the end, stood on the podium and gave it a huge swing. Every time it reached the height of one side, we sang.

Our training that week was about not only trusting him, but trusting each other – and trusting ourselves to listen to what was actually going on around us. Of course, that meant that in the performance, Mr. Shaw stood in front of thousands and presided over our joy in sharing this music. It appeared to the audience as if he was doing nothing – and I guess at that point, they were right. His work had been done earlier that week (and in his 70 prior years of study) in rehearsal – it’s really hard to listen, especially while you’re moving all over the place.

People we have helped